Skip to content
The Power of a Young Voice

Fifteen-year-old Greta Thurnberg had just entered High School when in August 2018, she began striking from school on Fridays to protest the Swedish government’s lack of action in climate control. Since then, she’s become a leading teen activist on the matter and even been on a tour of North America to give speeches across multiple countries. Her persistence at such a young age caught the attention of many and has been part of her powerful stand ever since, showing more determination than many older experts have on the matter. Part of her impact has certainly been the surprise many people have that such a young girl is so invested in her future and that of her peers, and that she was willing to do something about it; but this is something that we’re all capable of, no matter our age.

As far back as the early church in the Bible, St. Paul instructed a young Christian leader, “Let no one despise your youth, but set the believers an example in speech and conduct, in love, in faith, in purity.” (I Timothy 4:12). These points of guidance make an excellent place to start when it comes to making an impact on the world, no matter your age and no matter the times.

This first reminder of setting an example “in speech” is realizing that you have a point of view that no one else has, has had in the past, or ever will have in the future – and it’s worth sharing. Everything you’ve experienced has been unique to you and leaves you with a perspective no one but you can contribute to the world. If something is important to you, but you keep that to yourself, the whole world misses out on what only you can offer. So share that perspective!

There are so many ways you can spread the truth these days; and while it might be exciting to jump right into the internet and social media, don’t forget you can start in your very home and school first. Sometimes your more personal connections will have the biggest impact. Before trying to go viral, try speaking with your family and friends about what’s important to you – you might even find that you soon have a group of people with shared beliefs who you’ve inspired to speak up in their own homes, too.

Sometimes simply speaking about things doesn’t change patterns or laws, though. There are times when more steps have to be taken. “Preach the Gospel at all times, and if necessary use words,” is a quote that’s often attributed to St. Francis of Assisi. While its true origin is unknown, it’s an idea that spans across every century and rings with truth; our actions often impact people far more greatly than our words do, and it’s critical that our actions are consistent with what we believe and the Gospel we share with our words.

If we all say, “Someone else will do it,” nothing will ever get done. If you believe in something and are passionate about it, stand up for it. Whether it’s founding a Catholic or prayer club at your school or inviting friends to pray with you at an abortion clinic, sometimes the first step can start something great – and you can be the person to take that step.

The Greatest of These is Love

Even with the best logic and carefully laid plans, actions without charity have little, if any, lasting impact. If people speak or act with hate or even a lack of love, everyone gets more and more upset until what you stand up for becomes more of a fight than a witness of truth. It’s no surprise, then, that whatever we stand for should be stood for “in love.”

In fact, St. Paul makes it very clear that, “If I speak in the tongues of men and of angels… and if I have prophetic powers, and understand all mysteries and all knowledge, and if I have all faith, so as to remove mountains, but have not love, I am nothing.” (I Corinthians 13: 1-2) Even the greatest of actions – just imagine if you could move mountains, end hunger, or cure cancer – mean nothing without charity towards others. If you do anything, do it in love.

It might be easy to think that setting an example “in faith” only applies in church, but that’s far from true. Because our lives as a whole are aimed towards God and eternity in Heaven, our actions – both direct and indirect – should lead us there as well. In the words of the often-used challenge, if someone were to accuse you of being a Christian, would they have enough evidence to convict you?

While everything you stand up for might not be a direct matter of faith – explaining a church teaching, defending your right to worship, etc. – everything that you do still has the power to bring people closer to Christ; whether civil (i.e., a March for Life), environmental (recycling), communal (starting a school club to meet the needs of students), or more. Sometimes it is merely your example in one moment that causes people to think about small truths in their lives in other situations that can lead to the one Truth. Especially in a position of leadership where you’re capable of directing others’ actions, your faith should remain predominant for you so all your decisions are Christlike and morally sound.

After all this encouragement we read, it still might be easy to imagine that very few people are capable of such standards; but instead, everyone is capable if they choose because no one expects you to be flawless before you can set an example! My wise friend once reminded me “don’t think you have to be perfect to contribute” – which is the only reason I’m writing this to you today. Because in reality, it is true; if everyone waited until they were a perfectly finished product, no one would be able to help another here on earth. We strive after the perfect example of Christ, but in our humanity, we still fall.

St. Paul reminded his young friend to set an example “in purity,” both physically in his actions and in the intentions of his heart and mind; that purity of intent is something you should focus on as well. Since even doing a good thing for bad reasons is not good for you, those intentions are just as important as your actions, and a good place to start in self-reflection. As we won’t be perfect on this earth, instead of disqualifying yourself from setting an example based on your flaws, ask yourself about your intentions and if you desire to lead people to goodness and truth; if you do, and even if you stumble along the way, you can rely on God for the rest. He knows your heart even when no one else does.

In the end, there’s no age requirement or skill set demanded before you can learn about and speak up for the things that matter to you. You can and do have the power to make a stand for what you believe in, and for your voice to make a very real difference in the world, no matter your age. If you’re willing to let God work through you, He won’t be limited by worldly standards. 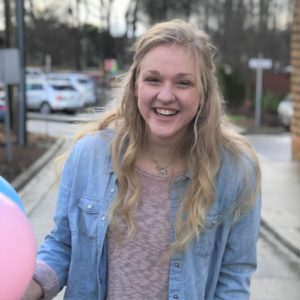 I’m a communications major at Franciscan University who loves my faith, family, brothers and sisters in Christ, and making people smile! I’m up for travel, chocolate, or a good story anytime; you can always catch me with song lyrics running through my mind and a book when I’m not planning my next great adventure - preferably involving horses or hiking!
All Posts
PrevPrevious10 Things Every Catholic VSCO Girl Needs
NextIf You’ve Ever Been Told Guys and Girls Can’t be Friends…Next