It’s almost 120 degrees in Phoenix as I write this. For a lot of people, that temperature doesn’t make much sense. How does a person contemplate what 120 degrees feels like?

I will tell you.

Imagine that you are standing behind the exhaust of a city bus, but that bus never moves.

I can’t complain too much. I chose to live in a desert. The harsh environment here can be deceptively beautiful for nine months out of the year. Sunny skies and beautiful sunsets lure you into a heat trap every June through August.

But I stay because August gives way to the steady cooldown of September and October, and by Thanksgiving, the desert is beautiful and full of life.

The desert has always been a place of death and life. Perhaps this is why it figures so prominently into the narrative of God and humanity. God leads people into a harsh wilderness to wander, but not without purpose. In the wilderness, God and the people build a relationship.

It isn’t a time that the people necessarily enjoy. At first, they complain and grumble because of monotony of food and a lack of water. Yet, God provides.

They experience the harsh reality of the desert in serpents that bear deadly poison and beg for deliverance. Again, God provides.

The people make it to the edge of the promised land but are denied access because of their lack of faith and wander the wilderness for 40 more years. But in the end, God brings them into the promised land and provides.

When reading through the Exodus narrative and into the book of Deuteronomy, I am hard-pressed to think that the people had fond memories of their time in the wilderness. It was a time of trial and challenge, even death. Before they go into the promised land, though, Moses (who won’t enter the promised land) gives a final speech. He recounts what the people learned in the desert and what God did. Moses doesn’t want them to forget the desert and its harsh reality. Moses wants them to remember because the desert meant something very different to God.

Many years pass, and the people of God build cities and armies and a beautiful temple. They go from being nomads to settlers, but in their settlement, they forget God. When their foundation is moved, the people crumble. God sends prophets to warn them of their infidelity and, through the words of the prophet Hosea, we learn what the desert meant to God:

“I remember the devotion of your youth, how you loved me as a bride, following me in the wilderness in a land unsown.” -Jeremiah 2:2

“Therefore, I will allure her now; I will lead her into the wilderness and speak persuasively to her.” -Hosea 2:16

The desert was a time of growth with the people. It was a time that God drew people toward Him, and they fell in love. In the desert, God was the only surety the people had, and God provided for them. In turn, the people grew in love and devotion to the Lord. God didn’t view the desert as a time of suffering but a time when people invited God close.

We cross deserts in our life and ministry that aren’t enjoyable. There is trial and challenge, and we aren’t always faithful. When we look back at those times, we see dry heat and death. But deserts bring beauty, and seasons of dryness give way to life.

Have you ever stopped to consider how God sees the deserts in your life? What would God say about those moments? Were they moments of trial, or were they moments when God was able to draw you close?

I don’t know if I can call “embracing the desert” a skill – it may be a matter of spiritual skill – but in our lives and ministry, we need to embrace the deserts of life. To walk through a desert is not an “if” but a “when.” Every year, I know that June will come in Phoenix and smash me in the face with city bus exhaust. I also know that fall is not far away and new life is coming. It’s only a season.

The people of Israel wandered for 40 years in a desert and lived in a kingdom for hundreds of years. It was only a season.

You may be walking in a desert right now. It’s only a season. New life is coming.

To embrace our deserts is to exercise hope, and this hope is necessary for ministry. Teenagers recognize inauthentic hope. If you don’t believe that new life can come from the desert, your teens won’t either. You can’t fake this kind of hope. It must be ingrained deeply within you.

You may be in a desert right now. It could be a desert in ministry, a desert in your prayer life, or a desert in your personal life. You may feel like you are wandering and directionless. You may be wondering where the promised land is and when you will finally be permitted to enter. You may be sweltering in 120-degree heat (literally or metaphorically). It’s a season. New life is coming, but at this moment, God is close and cherishes this moment. It is an opportunity to remember that God is the center and foundation of all you are and all you do. We need to simply stop fighting and embrace the desert where hope and love grow.

The heat of the desert in which I live will fade soon. At the moment, I don’t enjoy it. But, I know that soon the seasons will change, and I will be grateful for all that was and all that is and all that is becoming. The desert is inevitable, but so is the new life that follows.

Photo by Jeremy Bishop on Unsplash 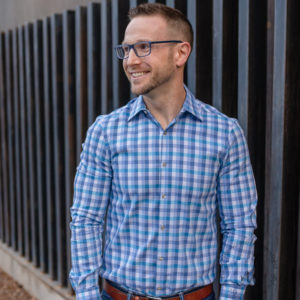 I spent most of my 8th grade year in detention because there wasn’t a dare I wouldn’t accept. But in high school, my youth minister dared me to follow Christ and I haven’t looked back. I love all things Wisconsin, especially the Green Bay Packers. I can probably eat more cheese than you. (Please don’t dare me to prove it.) Follow me on Twitter and Instagram at @ChasingHumility.
All Posts
PrevPreviousJourneying with Reluctant Teenagers
NextMarried In MinistryNext