It took me days to find a word for it. I knelt there in the chapel, staring up at the Eucharist, and I just couldn’t describe how I felt. My heart felt so light and open like I had never experienced before. I caught myself blushing slightly and unable to look away from Him. Every day that week I returned to the chapel, seeking out that feeling again, but it wasn’t until the last day that I finally found the word for it: femininity.

The mysterious feeling that kept flooding my heart was femininity.

No, I thought, that can’t be right. I’m not feminine. For as long as I could remember I had been the girl that loved playing soccer and hated playing house, who ate lunch with the boys and felt out of place with the girls. Growing up, I spent a lot of time thinking about what femininity actually was.

If you asked me now, I would tell you that femininity has nothing to do with being like other girls or liking “girly” things. Being a girl is a gift from God — a feminine expression of His glory. And for me, I learned a lot about that from veiling.

A veil is a symbol of the dignity of all women.

We veil things because they are sacred. The tabernacle, for example, is veiled because it is a sacred temple of life; women, too, are temples of life. We have been entrusted with the mystery of life through physical and spiritual motherhood and veiling is an outward acknowledgment of that.

Simply put, the term “veiling” refers to the practice of a woman wearing a head covering any time she is in the presence of Jesus in the Eucharist. While this practice used to be required of women, nowadays it is entirely optional and practiced as a personal devotion. Similar to the way that different people have devotions to different saints or the way that people can prefer different modes of prayer, veiling is a personal devotion chosen by a woman because it enriches her prayer life.

Saint John Chrysostom talked about women and veiling like this:

“[Christ] calls her to become one with Him: to come under his side and become flesh of His flesh and bone of His bone. […] The covering of the head with a veil symbolizes the reality of woman sheltered in the side of her Source and becoming one with Him. She becomes covered and hidden in her Divine Spouse.”

I can find no better words to describe why I like to veil. For me, my veil is a constant reminder in the presence of my Savior that I belong to Him, that He has chosen me, and that He isn’t going anywhere. The wound in His side is mine to call home because He is my Bridegroom, and as often as I approach Him, He is becoming one with me and forming me into a new creation.

That mysterious feeling of femininity that I felt before the Eucharist returns whenever I get the opportunity to be in His Presence. I wake up in the morning, eager to get to the chapel and adorn my veil, because I want to tell Him that I get it now. I get that being feminine isn’t about fitting in with the other girls. I get that He made me a woman on purpose and, in doing so, tasked me with revealing who He is in a specific way. I want to tell Him thank you for giving me this gift that is so much more than what the world thinks it is.

To Belong To Another

Saint Teresa Benedicta of the Cross (Edith Stein) said, “The deepest longing of woman’s heart is to give herself lovingly, to belong to another, and to possess this other being completely.”

For me, veiling is a concrete way of expressing my femininity and offering all these things back to my Creator. The devotion appealed to me because it is an offering of femininity and, therefore, one that only a woman can make. It’s a devotion that allows me to feel feminine and connect with that in a profound way that the world just can’t give me.

But regardless of whether or not you veil, it is the privilege of every girl and every woman to give God her femininity and to place the desires of her heart in the only place they are ever truly safe — in His Sacred Heart.

Now, when I see other girls, I don’t just see something I’m not or a standard I wish I could live up to. I see a temple of life, an image of His Bride, a mystery. And when I look at myself, I see the same and I am in awe that He has entrusted me with such a gift. 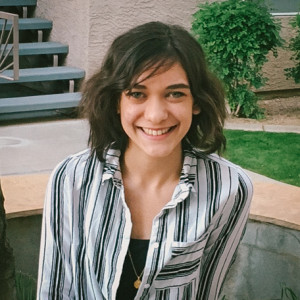 I'm a theology student at St. Mary's in London, but I'm still an Arizona girl at heart. I basically live off books, coffee, rainy days, and conversations about Jesus, who has stolen my heart and never given it back!
All Posts
PrevPreviousMen of God, Rise Up!
NextAn Open Letter to My Sisters This HalloweenNext